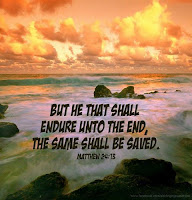 The Lord was already calling me out onto the streets a few months before my notice to vacate. When the notice came, I was prepared in my heart and in my mind to go out onto the street. I gave away everything I owned and those things that no one wanted were thrown away (except for those few things I wanted to keep, like my Christian CD's, important paperwork, family photos, etc...). I no longer had a place to live, a place to call my own. The comfort of my own bed was gone as was the knowledge that I had a place I could return to every day that I could call my own. What little physical comfort I have at this point in time is had by sleeping in the back seat of my son's unused car, which is parked in the driveway of his friend's (Tim) apartment building, or in sitting on a park bench.

It's definitely been a journey, even if it's only been a few short weeks. A few days ago I was asking my self why God would choose me to help bring healing to the hurting and broken lives of those living out on the street of this city. I'm not eloquent speaker; I'm not tall or handsome; I'm don't have any of the traits of someone who you would think that God would use for this mission. There are brothers and sisters in Christ who can rattle off scripture and give you the book, chapter and verse where it can be found... I'm not like that. For a long time I've felt inadequate in that area of my walk with the Lord. So, what do I have that the Lord can use? What worth did He see in me that caused Him to choose me? I thought of Moses, who felt ill-equipped for what God was sending him to do. I also thought about the Apostles who dropped everything at the calling of the Master. That's when I had my answer. I had a willing heart. When God told me that I would end up out on the streets to minister to the homeless, I just accepted it. I didn't fight or complain... I just said okay and then began planning for my life outside my comfort zone, which, as anyone who knows me can tell you, is very VERY unlike me.

In the weeks leading up to moving out on to the streets, I weaned myself off of my anti-anxiety medication. I guess that was the first thing God wanted removed from my life, and I was in total agreement with Him. I didn't need it any longer. He was my source of peace, not some little pill. The weaning process went smoothly and I believe I was off the medication completely a week or two before my transition to street life. That was the easiest thing I've done in this entire process.

I've had a chance to minister to several people while being out on the street, including a Christian couple who are homeless and who had slipped back into sin because they were living with people who did things that the Lord had brought this couple out of years ago, and my youngest daughter who has the misunderstanding that God is there to serve us and not the other way around. She is very confused in her Christian walk because she refuses to accept guidance. She is an expert in building walls!!!

Then there is my brother and sister. My brother had initially offered me a place to sleep, shower and eat, but then he rescinded his offer, saying, “I changed my mind. I can't help you out. Carol (my sister) should be there for you. Take care and good luck. You're in gods hands.” He went on to say, “You put yourself in the situation you're in, now it's up to you to help yourself. Yesterday you were all excited to be homeless. Maybe this is what you need to change your ways and ways of thinking.” My “ways of thinking” are in reference to my relationship with God. He believes I have gone overboard and take “religion” too seriously. So... He's pretty much disowned me.

Then there is my sister who, after a lengthy conversation, basically threatened to have the police force me into the hospital for observation because she thought that giving everything up for “god” to the point where I said that I was ready to give my life for Him was so opposed to how she believes, that she thought I had literally gone insane. It didn't help when I told her that God speaks to me. I wrote an article on my blog site about that, but it was the update to that blog article that really made her head spin. When she read that update, she called me on the phone and disowned me right there and then. She didn't want to have anything else to do with me.

There have been many instances where my faith grew weak. There were a couple of days there when I felt that I was blocked off from any communication with God. Other days old sins that I've spent a lifetime praying to be delivered from, seemed to try to creep in. There was a day I walked the streets dehydrated, stumbling over my own feet. There have been many times when I've felt the pang of hunger. I've spent painful and sleepless nights in the back of a car. There were times my body shivered as the cold of the night penetrated me to the core. Blisters on my foot has made walking slow and painful. Through all of this I could cling to only one hope... God. I believe that He will not allow me to go through anything that He has not created provision for. I also believe that He will not leave me here where I stand. The Potter has decided to beat me down into a lump to create me anew. This may seem strange to some, but I relish the idea of being used by God in a new way! Yes, I have my own personal journey though the desert to experience, but in the end, God will be able to use me in ways that wouldn't have been possible had I remained where I was. He would have needed to choose someone else. Praise God He chose me!!!

Here is the hope that I want to leave with everyone who needs to hear it. No matter how bad things seem, God is always there working in the midst of it all. The focus can't be on the situation at hand. Your focus throughout your ordeal needs to be on the One who has already provided an escape for you. He has already placed the provisions that you need and they're up ahead a little ways. You just have to keep walking forward and make it through to the other side to receive them. If you stumble, don't stay down! Pick yourself up, even if you stumble with every step you take. The reward is in the struggle! Although I have been through quite a bit recently, I remain hopeful that through all things God is with me. His Holy Spirit, who is with me 24/7, is a valuable help in difficult times.

Today I was thinking about Jesus on the cross. I pictured myself face to face with Him and in His agony, I pictured Him straining to look at me. It was then that I broke down crying, apologizing to Him for all the things that I had done that brought Him to that cross. His body was ripped apart before he was forced to march to His death. The blood loss was enormous and He began to suffer from dehydration. Blood dripped into his eyes from the crown of thorns forced onto his head. He was beaten and spit upon. His body struggled to take in breath after breath as it hung naked and misshapen on the cross.

Then we come to our struggles. Worth comparing? If you have the smallest faith, the smallest hope, God can use that to accomplish much. Let Him lift you up. Let Him help you take those first few steps back onto the narrow road. Sometimes God requires more than we expect, but remember, those who endure to the end will be saved!
Posted by Ken Souza at 6:30 PM