The Most Beautiful Words in the Gospels 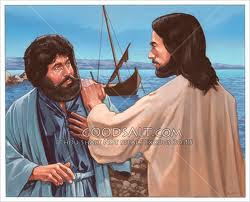 What are the most beautiful words in the Gospels?
These two right here:

These two words are found in Mark 16:7 and I find them to be the most beautiful and moving words in the Gospels. Every single time I read them, they get my heart beating. They give me shivers and chills. Sometimes I even choke up in tears.

Why?
We all know what Peter did. He was one of the three closest companions that Jesus had. He was the spokesperson for the twelve apostles. He was the one who promised He would never deny Jesus.
And when the soldiers came to arrest Jesus in the Garden of Gethsemane, Peter was the only one who tried to defend Jesus.
When Jesus was escorted away to His trial, Peter was the only apostle who followed. The rest scattered into the night and hid.

Yet despite all this zeal for Jesus, it was only Peter who verbally denied Jesus. It was only Peter who cursed Jesus. Not once. Not twice. But three times. (Possibly even six times.)
This is certainly the low point of Peter’s life. He feels abandoned and betrayed. And Peter even betrays and denies Jesus. He probably feels that all is lost, and that whatever happens, He is lost for eternity. He is done for. God will never forgive him.
All of us have felt this way from time to time. Like we have done something or said something so terrible that Jesus could never forgive us.

So when Jesus rises from the dead, I find it terribly comforting that when the angel tells the two women who first witness His resurrection to go and tell His disciples that Jesus has risen, the angel emphasizes that they must also tell Peter. He singles Peter out. “Go tell the disciples,” the angel says, “and Peter…”
Yes.

Posted by Emma Kimberly at 8:18 AM