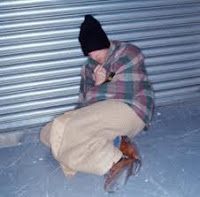 In today’s society we tend to judge people harshly due to the circumstances we see them in. The rich judge the poor and call them lazy. The poor judge the rich and call them selfish. This is foolishness. Not only does the Bible tell us in several places to not regard people by their social stature, it tells us that circumstance can change in an instant. I call it the Job factor. Job was a good man. Job had everything a man of his time could even think to want. He had nothing to worry about. Let’s put this in today’s terms.

Job was the head of a global corporation. He had a diverse stock portfolio. He lived in an exclusive gated community. He drove a Mercedes and his wife drove a Lexus. His children attended Yale and Harvard. He was a deacon at his church and did charity work in the community. He had the life everyone wanted. He got up one morning feeling happy and secure in the blessing god had placed on his life. The phone rings. His accountant is calling saying that his investments have tanked. He goes to work and the SEC has locked down the building. He has no job. On his way home he gets a call telling him that the plane his kids were on has crashed and there are no survivors. A few months go by and we see a sickly old man lying with a tattered blanket clutched to his chest in front of the soup kitchen. This is Job.

The old beggar is mostly invisible to the people passing by and going to their jobs, their meetings, their nice homes. The ones that notice leer in disgust and say things like, “Get a job!” He doesn’t notice anymore. When he sleeps he dreams that he had another life, a good life. When he wakes he tells himself that it is just a dream. A young preacher with a heart for the poor stops to talk to the old beggar. He gives him a job cleaning up at the church. The pay isn’t much but it comes with a clean, dry room at the back of the church. He saves his money and buys a suit at the thrift store. He decides he is presentable enough to attend church service that Sunday. After the service is over, a familiar looking man in an expensive suit comes over to him. “Job?”, he asks. “I have been looking everywhere for you! The SEC found an error in their findings against The Company. They are paying all the executives a full six month’s worth of salary plus the value of all their benefits. They owe you MILLIONS! All you have to do is go sign the paperwork!” Job wept for joy.

This is not just a Bible story. This happens to people everyday. It doesn’t take much to change circumstances and often we have no control. So next time you judge someone for where they are in life, remember The Job Factor.

Posted by Emma Kimberly at 4:14 PM