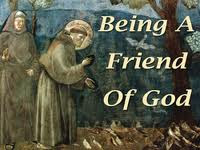 NO OTHER RELIGION BOASTS of friendship with its God. This is one of the many distinctives of the "great salvation" that is ours in Christ. Until Christ, there were few people of our race with whom the Lord could fellowship. That privilege was largely lost when sin entered into the very environment God had called "good." It is written that "Enoch walked with God" (Gen 5:22,24). Noah is also described as a "just man" that "walked with God" (Gen 6:9). Their "walk" however, was largely related to their revulsion with an iniquitous world in which they lived. Jude provides us with a prophecy of Enoch. It was one of impending judgement, to be fulfilled immediately in the Noahic flood, and ultimately in the coming of the Lord and the destruction of the wicked. "Behold, the Lord cometh with ten thousands of His saints, to execute judgement upon all, and to convince all that are ungodly among them of all their ungodly deeds which they have ungodly committed, and of all their hard speeches which ungodly sinners have spoken against Him" (Jude 14-15).

NOAH'S FAITH not only resulted in the saving of his house, but also in the condemnation of the world (Heb 11:7).

THE WALK WITH GOD enjoyed by Enoch and Noah was vital, but it was not fellowship at the level God desired. Being repulsed by evil is a requisite to fellowship with God, but it is not at the heart it. This is devastating to a legalistic view of spiritual life. In my judgement, Satan has perpetrated the notion that being against evil is sufficient to obtain divine approval. This is not the case! It is written of Jesus that He not only "hated iniquity," but that He also "loved righteousness" (Heb 1:9). It is clear from Scripture that true spirituality requires both traits. As it is written, "grace" teaches us not only to "deny ungodliness and worldly lusts," but to "live soberly, righteously, and godly in this present world," all the while "looking for the blessed hope and glorious appearing of the great God and our Savior, Jesus Christ" (Tit 2:11-12).

A DIFFERENT DIMENSION
Abraham stands unique among the sons of men. Because of that uniqueness, he is called the "father" of all that believe (Rom 4:11,12,16). When God promised Abraham "seed" as multitudinous as the stars of heaven and the sand of the seashore, he "believed God" (Gen 15:6; 22:17; Rom 4:3; Gal 3:6; James 2:23). That faith endeared him to God, provoking Him to call Abraham His "friend." The patriarch required no further evidence to substantiate the promise. God's word was sufficient!

LATER SCRIPTURE ASSESSES ABRAHAM: "Art not Thou our God, Who didst drive out the inhabitants of this land before Thy people Israel, and gavest it to the seed of Abraham THY FRIEND for ever?" (2 Chron 20:7). "But thou, Israel, art My servant, Jacob whom I have chosen, the seed of ABRAHAM MY FRIEND" (Isa 41:8). "And the scripture was fulfilled which saith, Abraham believed God, and it was imputed unto him for righteousness: and he was called THE FRIEND OF GOD" (James 2:23).

WHAT A MARVELOUS THING! – to be known as "the Friend of God!" Note! He does not say "A friend of God," but "THE friend of God." "Friend," in this case, means "associate" or confidant. It is someone in whom another confides. In the case of Abraham, God divulged His intention to bless the world through His offspring. Considering the times, and the sparse amount of communication between God and the human race, this is a wonderful thing! The Living God took a man into His confidence, divulging something that would not be comprehended for centuries to come. The remarkable word of the Lord on this matter challenges our mind. When sending angels to destroy Sodom and the cities of the plain, "the LORD said, Shall I hide from Abraham that thing which I do" (Gen 18:17). Furthermore, concerning the coming Messiah and the day of salvation, Abraham was so close to the Lord that God could not keep from revealing the plan of the ages to him. He had determined to bless the whole world, which He had previously destroyed by water, through the offspring of the woman – specifically, Abraham's Seed (Gen 12:1-3). This promise still challenges the minds of those dominated by the Spirit. How close Abraham must have been to the Lord for Him to reveal this secret in such spiritually primitive times!

WHAT IS A FRIEND?
This is a very strong word, denoting more than mere familiarity. There is nothing casual about the word. The word "friend" comes from a word meaning "dear, i.e. a friend; in action, fond, i.e. friendly (still as a noun, an associate, neighbor, etc.): – friend. In the Hebrew, it carries the idea of intimate involvement based upon affinity. Scripture uses the word more in the sense of an "associate," someone brought into an established purpose – a confidant – someone with whom personal matters are shared and to whom purposes are divulged.

ABRAHAM IS CALLED THE FRIEND OF GOD because he was dear to the Lord, and thus the Divine agenda was revealed to him. The friendship was not merely one of closeness, but one that moved the Lord to divulge His purpose to Abraham – a purpose involving the whole world. Even when He purposed to destroy Sodom, He was moved to tell Abraham of His intentions. Friendship with God is something to be desired by all of us.